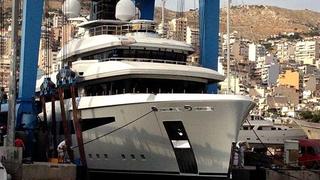 The first hull (163.10) of the 50m Cosmo Explorer yacht series has launched. Her sister ship, 164.10, is still fitting out and isn't expected to launch before 2014. Both hulls were built by subcontractor MegaTechnica Ltd. Shipyard in Perama, Greece.

The owner of Alizul Finance Corporation Ltd. founded Cosmo Explorer in 2010; while new to yacht building, his experience as an avid yacht owner influenced the brief of ice-classed, highly-specified, five-deck 50m explorer yacht. The 50m Cosmo Explorer is built for unrestricted service and built to ABS classification and MCA LY2 code. Exterior and interior design of the Cosmo 50 was by Cristiano Gatto.