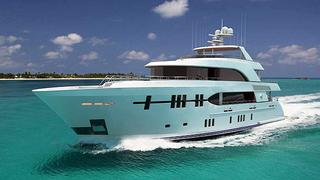 The first 36.5m (120') motor yacht built in the alliance between Ocean Alexander and Christensen is on course for its debut at the 2012 Fort Lauderdale International Boat Show.

Currently over 65% complete, the shipyard has recently applied the topcoat exterior paint and major interior components are being installed. The wall coverings and interior cabinetry are beginning to go in, along with the custom stonework throughout the yacht. It is on schedule to hit the water in August of this year and, after a month of applying finishing touches, it is scheduled to be delivered in September.

This is the first of three contracts in the alliance between Christensen and Ocean Alexander, with interior design by Evan K. Marshall.

Says Evan Marshall: 'With an emphasis on an “International” style and first class build quality, this new series of yachts, which also includes 135’ and 155’ models, will soon establish a new class benchmark.'