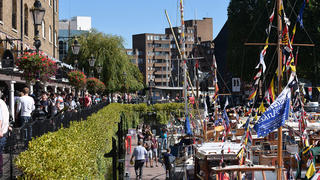 The London Yacht Show has been postponed until 2020.

Organised by Informa, in partnership with St Katharine Docks and British Marine, the London Yacht Show was first announced in December 2018 and was due to take place next month from the 8th - 12th.

President of Informa's maritime portfolio, Andrew Williams, said that the cancellation was due to a faltering of market interest. “Since an initial burst of interest in the London Yacht Show, take-up has slowed from some segments of the industry and from luxury brands," he said.

"And so, with just over a month to go until the planned launch, overall commitment to the event is not at the level required to deliver a show with the profile, scale and market breadth the industry asked for and deserves in London."

He added that the shareholders agreed a postponement of the show was in "everyone's interest." "We are all now very focused on delivering a great event and experience in 2020, creating a unique experience for visitors and a leading UK showcase for exhibitors within the growing, international yachting, boating and luxury markets.”

Sunseeker, Azimut and Princess were three of the 12 yacht exhibitors confirmed to attend the relaunched five-day event, which was intended to replace the London On Water Boat Show.

The relaunched show has been rebranded a “boutique luxury show”, with a focus on high-end quality. A total of 60 boats were set to be on display on the water, with each brand restricted to exhibiting three models.