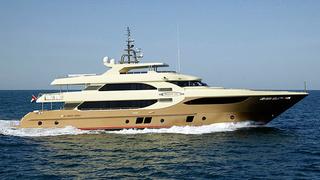 UAE-based shipyard Gulf Craft has launched the first in their new series, the Majesty 135.

Bureau Veritas classed and MCA compliant, this new composite series has a length of 41.05m. The naval architecture and exterior styling are by the in-house team at Gulf Craft. The interior design is by Donald Starkey, accommodating 10 guests in a full-beam master suite on the main deck and four double cabins on the lower deck.