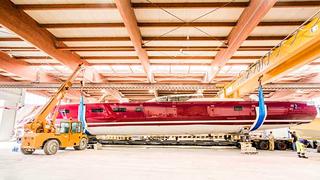 Maxi Dolphin's 30.48m FC100 sailing superyacht, named Nomade IV, has left the yard in Erbusco, Italy. She is traveling to Marghera, near Venice, Italy, where work continues until Nomade IV is scheduled to be delivered to her owner mid-July 2013.

According to the superyacht's designer, French Naval Architects Finot-Conq, the brief and goal for the FC100 can be summed up as: creating the world's fastest 100-foot cruising yacht. In an attempt to achieve its high-performance goals, she has been constructed entirely in carbon-fibre and Nomex to stay under the strict restriction of only 51 tons of displacement. The FC100 features a hard-chine running from bow to stern, nine tons of ballast on each side, a lifting keel and two rudders. She carries 1,400 sqm of sail when flying the gennaker. Nomade IV will undergo extensive testing and 800 miles of planned sea trials before delivery. The minimalist interior is designed by Pierre Frutschi and accommodates 12 guests.

A busy race season is planned, kicking off with the Maxi Yacht Rolex Cup in Porto Cervo, Sardinia. With a cherry-red hull, she will be unmissable on the race course. Made for cruising as much as racing, she boasts a transom that converts to a swim step, which also opens to launch a tender and reveals double stairs into the sea. The cockpit table lowers and transforms into a large sunpad.