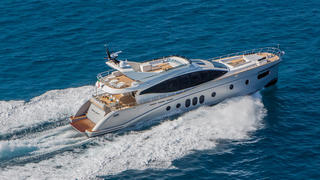 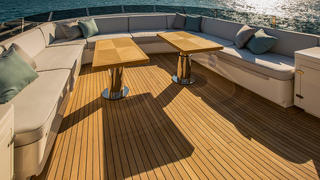 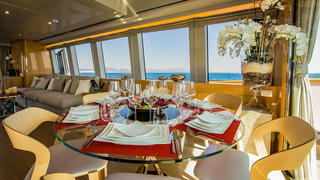 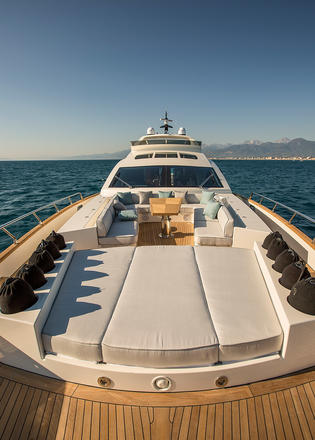 The yard was bought out last year and the new owners said that they aimed to retain the original spirit of Versilcraft while adding a few modern twists and features.

Accommodation is for eight guests split across four cabins, including an amidships master suite that stretches across the full six metre beam. The crew quarters allow for a staff of up to four people.

Versilcraft aimed to maximise the amount of space available below decks. To this end, the Versilcraft 86 features a plumb bow, which maximises the space available in the bow end VIP suite. The colour scheme throughout is soft, yet masculine, with grey marble, light wood and grey accents.

One of the key features of the new Versilcraft 86 is its open plan superyacht sundeck, which is dedicated to exterior relaxation, with no upper helm station or barbecue to take up valuable lounging space.

Take a closer look at the new Versilcraft 86 motor yacht

On the main deck, the theme of open-plan living continues, as the spacious saloon leads directly into the pilothouse, with only a tinted glass screen to separate these two areas. Other key features include a large foredeck seating area and an iPad controlled entertainment system.

Power comes from a triple Volvo Penta IPS 1200 pod drive set-up for a top speed of 26 knots and fast cruising at 24 knots. When trimmed back to 12 knots a maximum cruising range of 550 nautical miles is possible, thanks to a total fuel capacity of 7,400 litres. Built on speculation, the Versilcraft 86 is currently offered for sale.