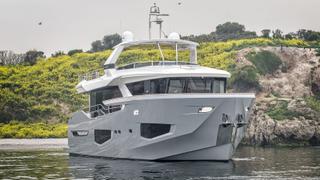 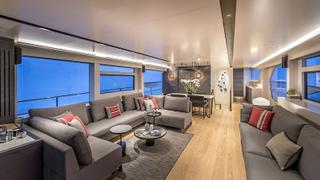 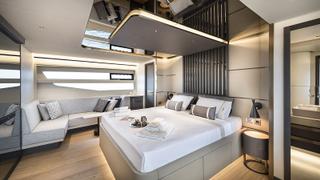 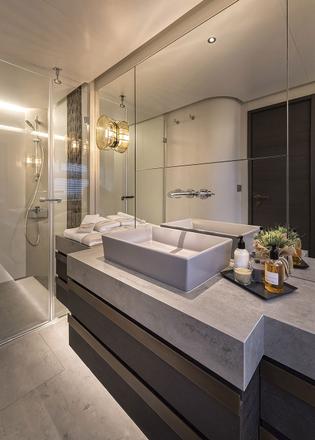 Sold in May 2016 and recently delivered to a repeat Turkish client, this 25.68 metre model is part of the yard's explorer collection that includes the 40XP and 32XP. This series is designed to allow owners to go anywhere in the world, but the advantage of the 26XP is that it offers the convenience of being able to berth in some of the smaller, more remote locations.

Designed by Can Yalman and with naval architecture by Umberto Tagliavini, Gioia's angular windows and vertical bow evoke a family resemblance to Marla, the first Numarine 32XP yacht, which was launched last summer.

Accommodation is for up to eight guests split across four lower deck staterooms, including an amidships master suite, two VIP cabins and a twin cabin. The crew quarters allows for a staff of up to three people.

The 26XP's 150GT interior includes an extensive main saloon, while the 16 metre long flybridge has been fitted out with an al fresco lounge and a dining table, with enough room left over to store a five metre tender.

Take a closer look at Gioia, the first Numarine 26XP

Built from GRP and powered by two 1,550hp MAN diesel engines, Gioia hit a top speed of 28 knots on sea trials and offers a cruising speed of 18 knots, riding on a semi-planing hull, but the yard adds that a full displacement 1,120hp version will also be made available, offering a maximum range of 3,500 nautical miles at eight knots.

The latter appears to be the more popular choice, with Numarine's sales and marketing director Orhun Senturk explaining that the next three hulls in this series will all feature this set-up. These yachts are being built for clients from Europe, Russia and the Middle East and will all be launched before the end of the year.

Omer Malaz, founder and chairman of Numarine, added: "Hull number two will be soon launched in her full displacement version specially designed for its owner. She will have our silent package with a lithium-ion battery system allowing all necessary onboard systems including air-conditioning to run without generators for up to 12 hours.”