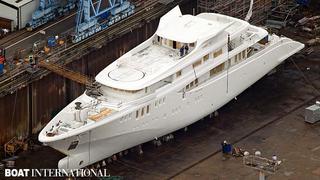 First picture of superyacht Project 423 under construction at ADM Kiel

Project 423 was originally ordered along with five other sisterships, but with the onset of the financial crisis, all but two of the projects were cancelled – this yacht being the second of the survivors.

Although her hull is being completed at ADM Kiel (ex-HDW yard), it is understood that she will be fitted out at Nobiskrug in Rendsburg. Little else is known about her at present.