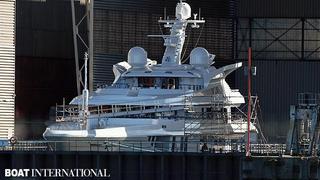 Superyacht Project 422 set to be launched at ADM Kiel

Here is the first, exclusive picture of Project 422, the 73 metre superyacht currently under construction at ADM Kiel. As we revealed in January, this superyacht is one of 2012's top new yachts, with her launch imminent and delivery scheduled for later this year.

Very few details are known about this superyacht at the moment, although her background story is well-know in the industry. She was originally ordered along with five other sisterships, but with the onset of the financial crisis, all but two of the projects were cancelled - this yacht being one of the survivors. It is understood that the other yacht, her sistership, will be fitted out at Nobiskrug.

The picture shows that HDW's famous dry dock HDW (superyacht A was the last to leave it) is already flooded, suggesting that the yacht will be launched soon. We'll bring you updated pictures when that happens.

Project 422 will be the first yacht to leave HDW since the yard was rebranded ADM KIel.