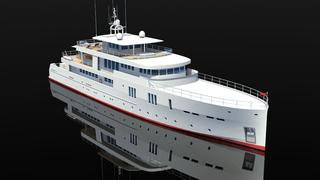 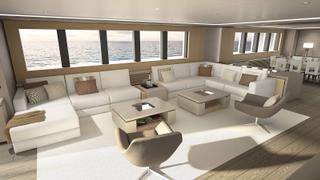 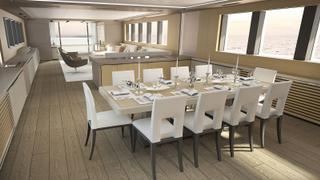 French designer Franck Darnet has released the first renderings of his interior design for the Ocea superyacht concept X47.

First revealed in 2015, this 47 metre features exterior styling by Michel Joubert and Bernard Nivelt and would be built from an aluminium hull and superstructure to Bureau Veritas standards.

As the renderings below reveal, Darnet Design has drawn up a clean, modern interior décor, which uses light woodwork and white soft furnishings to create a fresh and relaxing atmosphere.

The open-plan saloon features a lounge area with two large L-shaped sofas and occasional chairs. Further forward a more formal dining area allows ten guests to enjoy a meal around a square table. Large square windows on both sides ensure that plenty of natural light can filter through to the interior.

Meanwhile the crew quarters allow for a staff of up to 11 people and all cabins would be fitted with en-suite facilities and LCD televisions. Key features include two large aft decks and a vast superyacht sundeck. The yard adds that the layout can be easily modified to suit a client’s wishes.

Power would come from a pair of 1,300hp Caterpillar engines that would allow for a top speed of 17 knots and a maximum range of 4,000 nautical miles at the cruising speed of 15 knots.

Other projects currently under development at the French yard include the Oceanemo range of explorer yachts, which were designed in collaboration with Fulvio De Simoni.