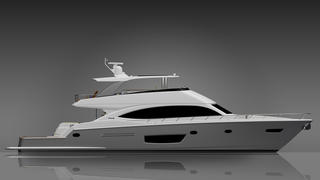 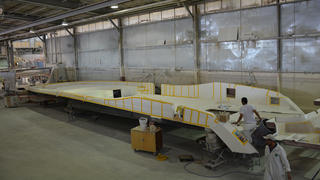 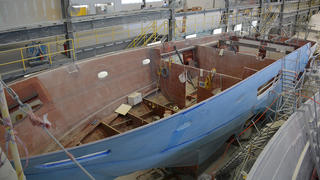 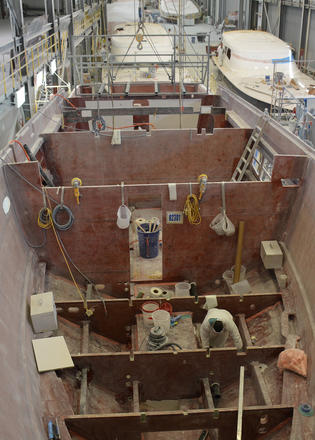 First Viking 82 Motor Yacht in build at US yard

Hull number one in the Viking 82 Motor Yacht series is under construction at the American yard’s New Jersey facility and due to be delivered by Viking Yachts in March 2017.

The owner of the first 25.43 metre flybridge Viking 82 Motor Yacht chose light Anigre hardwood for all of the interior furniture and joinery, as well as twin 1,925hp Caterpillar C32 engines, which is one of four powertrain options offered on the 82MY.

Built on the same platform as the Viking 75 Motor Yacht series, which has spawned five hulls to date, the 82 features an extended cockpit that measures ten metres square. Twin staircases lead down to the bathing platform, which is an ideal platform for fishing, diving, stand-up paddleboarding or other water sports.

Inside, the lounge area features a sociable and sophisticated décor with both formal and casual dining areas. All guest accommodation is situated below decks, with two double cabins and a twin room, as well as an amidships owner’s cabin that is illuminated by large hull windows and makes good use of the 82’s 6.25 metre beam.

Crew accommodation for a staff of up to four is accessed via a separate staircase back aft. Custom navigation and entertainment systems are being installed by Viking Yachts’ subsidiary Atlantic Marine Electronics.

First announced at the 2014 Fort Lauderdale International Boat Show, the Viking 82 Motor Yacht also include a foredeck seating area, and tender storage on the upper deck, which will be offered in open flybridge and enclosed skylounge versions.