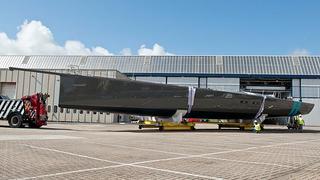 Wally has announced the launch of the first WallyCento sailing yacht, called Hamilton, which hit British waters off the south coast of England yesterday.

The 30.48m yacht was built by UK yard Green Marine to the WallyCento 'box rule' class, created by Wally to offer potential owners the chance to race competitively in a high-performance class while still affording a few luxuries for post-regatta cruising.

'The Cento is of course the greatest challenge for every boatbuilder,' comments Green Marine managing director Marcel Müller, who Boat International caught up with a couple of weeks before the launch. 'It is supposed to be the perfect mix of a Grand Prix thoroughbred racing yacht and a luxury cruising boat, and I think the concept is both exciting and thrilling.'

Naval architect Judel Vrolijk has given Hamilton a beautiful planing hull coupled with a powerful sail plan and moveable ballast. With a sail area of 640 square metres, this composite sailing yacht is expected to exceed 25 knots downwind. The interior, designed by Design Unlimited will accommodate eight guests.

The Cento certainly looks the part, and is a far cry from many of the sailing superyachts of her size. 'There is a difference between a performance superyacht like Inoui and a cruiser-racer like a WallyCento,' Müller continues. 'The structure of a Cento is built exactly like a TP52. We use Nomex in the hull shell, and we're working with intermediate modulus carbon fibre, which is a higher grade carbon. The core structure is extremely weight optimised and of course the interior room is driven by practicality, structural requirements and also sail-handling requirements.'

To this end, it is notable that the forward master cabin on Hamilton can be opened to the deck through a large hatch – not designed for a good airing so much as to enable a spinnaker to be dropped straight below decks on the race course. Specially built carbon screens will be installed before racing to shield the interior furniture from damage. 'There's virtually no sound insulation in the boat, so it's all optimised for weight. The Cento is a thoroughbred sportsboat.'

A second WallyCento, currently under construction at WallyEurope in Ancona, is scheduled to be launched at the end of the year.

'Next year they will engage in epic duels on the water with Magic Carpet Cubed, the second Wallycento we have in the order book, further raising the racing level,' commented Luca Bassani Antivari, Wally president and founder.

However Hamilton will be making her debut on the racing circuit long before this, participating in a number of regattas including the Wally Class of the Maxi Yacht Rolex Cup (2-8 September, Porto Cervo), and Les Voiles de Saint Tropez (30 September-7 October).

Hamilton will have her rig stepped in a week or two, and will be delivered this summer.