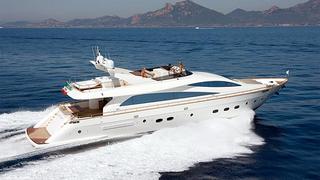 The Italian yard Permare, which launched its flagship Il Gattopardo earlier this year, is back in the news with an interesting twist. In a world where all marketing campaigns look similar, they've had the brainwave of broadcasting the construction of their latest Amer 92 on Twitter.

This Amer 92 is the 9th one of the series and the 71st yacht from the yard. Like her sisters, she has a length of 28 metres and a naval architecture by Massimo Verme. Her interior, designed by the in-house team, will accommodate eight guests in four cabins comprising a full-beam master, VIP and two twins, plus a crew of three. She will be powered by twin 1,800hp MAN engines giving a top speed of 31 knots and a cruising speed of 27 knots.

Day by day, it's possible to follow each step of the construction, most of the time a picture is attached to the comments, and a counter ticks off the days before the launch. The hull arrived on 24th April, the superstructure on 3rd May, both were assembled on 5th June, engines were installed on 3rd July, and so on. Interesting details are disclosed also, for example we learn that two tons of cables are installed representing a total length of 12km!

Barbara Amerio, co-owner of Permare comments: 'We like to experiment with unusual ways to promote our models. The internet is a huge shop window, but how to capture the attention the followers and send a positive message? Our idea is to show the work in progress at our shipyard and give the public access to hidden processes usually known only by technicians and professionals.'

Many other comments will be posted until the launch in September. This Amer 92 could be presented at the Festival de la Plaisance of Cannes, but her official debut is scheduled for the Genoa Boat Show in October.