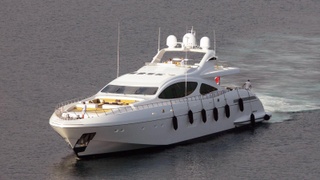 A UK court has ordered the sale of the 49.9 metre Mangusta 165 superyacht Force India, it has been reported.

News publications report that a ruling made by the High Court on Monday (January 28) ordered the yacht must be sold to repay creditors. The yacht is reportedly owned by Siddharth Mallya, son of tycoon Vijay Mallya.

It is understood that the proceeds of the sale will be used to pay back an outstanding loan payment of nearly €6 million to Qatar National Bank after it was reported that the yacht was bought with money borrowed from the bank.

In its ruling, the court also asked other creditors to come forward to register their claims, FirstPost.com reports.

The judgement from Justice Nigel Teare read: “Security for the loan… included a personal guarantee from Dr Mallya, an individual closely connected with the borrower.”

Delivered in 2007, the 49.9 metre yacht Force India was built by Overmarine as a Mangusta 165 model and designed by Stefano Righini. The yacht has a top speed of 40 knots and can accommodate up to 10 people with eight crew members.