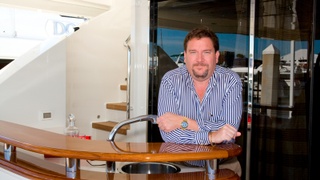 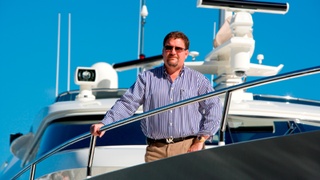 Members of the superyachting industry have paid tribute to former Palmer Johnson president Mike Kelsey, Jr, who died at the age of 57 on January 4 following a long illness.

A stalwart of the boating industry, Kelsey learnt the business from his father, Mike Kelsey Sr., who ran the company until his death in 2002. Under his influence, Palmer Johnson, which was already considered a pioneer in aluminium yacht building, teamed up with Italian design studio Nuvolari Lenard and became a major player in the superyacht industry.

Together, they built the 59.4 metre La Baronessa, which was the biggest aluminium yacht ever built at the time of her delivery in 1998. Other standout deliveries included the 30.2 metre Fortuna to King Juan Carlos of Spain. Now named Foners, the yacht is still widely considered to be the fastest in the world. And one of the world’s first true expedition yachts, 42.2m Turmoil, now Pioneer.

Martin “Mike” Kelsey III, better known to the yachting industry as Mike Kelsey Jr, became the third generation of the family to join the business, first as a sales broker in the 1980s and then as vice president of sales for Palmer Johnson Savannah in 2003.

After a rocky ownership period for the company that coincided with a rough economic context, in 2004 Timur Mohammed bought the company, restructured, moved and sold the Savannah yard and reinstated Kelsey as president of Palmer Johnson.

As president, Kelsey oversaw the renewal of the yard’s SportsYachts line with Nuvolari Lenard and remained in the role until 2015 when Mohamed moved the company out of Sturgeon Bay.

Speaking about this time, Mohamed recalled: “When I acquired Palmer Johnson in 2004, Mike quickly became my close and trusted friend. It was also immediately clear that he had to be the face of Palmer Johnson - he lived and breathed it.”

Speaking of Kelsey’s qualities as a broker, Mohamed remembers his “most amazing recall and knowledge of the history of yachting” and “his effortless style of storytelling”. These qualities were key in his success in selling more than 25 Palmer Johnson Sportyachts between 2004-2009.

Mohamed added: “He was a natural, and certainly he was not a broker selling yachts for a commission.”

His praise was echoed by president of Moran Yacht and Ship, Robert Moran, who knew Kelsey for over 20 years.

“I had the great fortune of sailing and building six yachts with him at the Palmer Johnson Shipyard, which included the largest yacht that Palmer Johnson ever built – the 64 metre Lady M,” Moran said.

“I like Mike as a person and a professional – he was a straight up honest man whose company I greatly enjoyed.”

Mohamed added: “They don’t make them like Mike anymore. It’s the end of a story that I will always fondly remember.”