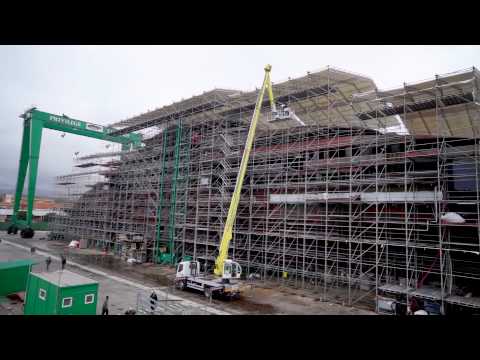 The main facility of defunct Italian shipyard Privilege Yachts has been put up for auction, more than 18 months after the CEO was placed under house arrest.

The Court of Civitavecchia has set a starting price of €9,400,000 for the lot, which includes the surface property right to 11 buildings over a total area of 102,000 square metres and 24,500 square metres of solar panels. The sealed bid auction is due to end on April 19.

The unfinished hull of the 127 metre motor yacht Project P430, one of the largest new yacht projects in the world, remains at the yard, however, the auction mentions that there are conditions related to the ownership of the yacht that will continue for up to 12 months after the deadline for bids.

Privilege Yachts was founded in 2006 and in 2008 it signed a contract to build the 126 metre superyacht Privilege One with funding from a consortium of five Italian banks. A 137 metre yacht based on the same design was also said to be under construction at the Citavecchia yard.

Construction stalled in 2012 when one of the backers, Banca Etruria, pulled out, but in 2014 CEO Mario La Via claimed that he had secured further finance and planned to launch Privilege One before the end of the year. The company filed for bankruptcy in 2015 with reported debts of €210 million, and an auction in July 2015 failed to attract a buyer.

Privilege Yachts is not to be confused with the French yard Privilege Marine, the builder of Privilège catamarans, who are based in Les Sables-d'Olonne and won the Prix Etienne Marcel award for responsible entrepreneurship in July 2016.