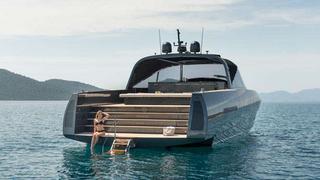 We first learned of the Foster & Partners project with Alen Yacht of Turkey almost two years ago and have been chomping at the bit to share.

Now the yacht, designed for the owner of the 56m Perini sailing superyacht Panthalassa, can be shown. Her transom brandishes the name Iguazu. The 20.32 metre sport boat is built of composite with an Airex core while a pair of V12 MAN engines push it to 45 knots with a cruising speed of 41 knots.

Clever utilization of the below decks space allows one or three staterooms. In the one-stateroom configuration, the saloon forward can seat up to 12 guests in addition to ample deck seating. Unusually, none of the furniture actually touches the inside of the hull, but instead sits just off it, tracing the contours of the white leather walls.

Deck space has been maximised due to the yacht’s 20 per cent volume advantage over rivals, offering a full walk-around platform for entertaining and relaxing. Flexible seating means all 12 guests can dine on deck, served by the grill, drinks cabinets and even teppanyaki hotplate. There’s also room for three sunloungers and to fabric recliners. Time at anchor, meanwhile, should be free of any wallows thanks to the optional Seakeeper gyro stabilizer.

In the tender garage, there is a 3.2 metre jet tender, as well as plenty of toys including Sea Bobs, paddleboards and a Jet Ski. Leaving all those option boxes unticked gives a starting price of €2.8 million, but the boat’s charms are clearly making their mark as the second one is in build now.