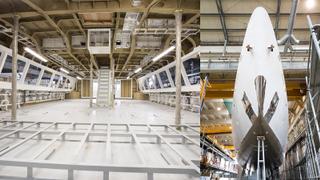 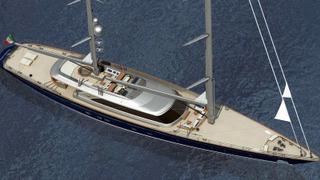 Italian yard Perini Navi has released new in-build photos of its 60 metre sailing superyacht Project C2239, which is currently under construction in Viareggio.

Due for launch in 2019, this is the fourth hull in a series that has already spawned Perseus 3, Seahawk and the 2017 launch Seven.

Ron Holland Design developed the naval architecture, while the in-house team at Perini Navi contributed the exterior design. Vital statistics include an 11.4 metre beam, 491GT of interior space and a maximum draught of 4.3 metres.

Accommodation is for up to ten guests split between five cabins, including a master suite, two doubles and two twins. Meanwhile, the crew quarters is suitable for a staff of up to nine people.

Auxiliary power will come from a pair of MTU diesel engines for a top speed of 15.5 knots. What’s more, the total fuel capacity of 47,500 litres should ensure that Project C2239 will boast an impressive range under power. Further details are being kept under wraps for now, with the interior designer currently undisclosed.

Other superyacht projects currently under development at the Italian yard include the 25 metre Perini Navi Eco Tender, which is due to hit the water in early 2019. Looking even further ahead, Perini also has a 52 metre motor yacht and a 56 metre motor yacht in the pipeline – scheduled for 2019 and 2020 respectively.