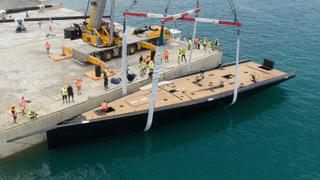 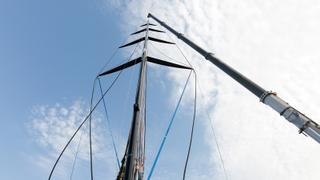 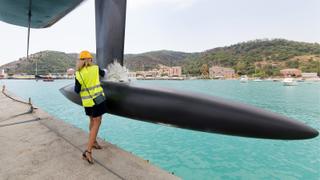 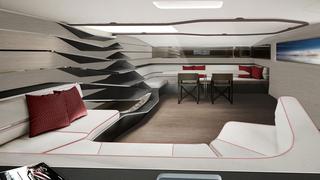 Sailing yacht specialist Wally has launched the 30.48 metre Tango. Hull number four in the Wallycento series, she was built on the Ligurian coast by Persico Marine and will now undergo sea trials before her late August delivery.

Luca Bassani, founder and president of Wally, said: "Tango turned out exactly how we envisaged her when we started developing the project: super sleek lines and an aggressive overall appeal conveying her high performance DNA."

Persico Marine is known for large-scale composite manufacturing and has been involved in several recent America's Cup and Volvo Ocean Race projects, but this is the yard's first fully-custom cruising yacht.

Marcello Persico, managing director of Persico Marine, said: "We worked hard to lighten the interiors as much as possible, not just using carbon fibre and nomex sandwich in the joinery construction, but also developing different solutions to build, for example, the hinges and veneers.” The result is a lightship weight of just 47.5 tonnes.

With accommodation for six guests and a dining table for 10, Tango provides comfortable luxury for cruising and the 300hp engine means she can motor along at 11 knots between races. The advanced Wally sail handling features also deliver easy control for single-handed sailing.

Wally announced the sale of the fourth yacht in its Wallycento series in November 2015 and renowned Italian design house Pininfarina was confirmed as the interior designer three months later.

"The interior design of this Wallycento challenged our team to achieve the perfect balance of performance and comfort,” added group chairman Paolo Pininfarina. “Thanks to the selection of the materials and the innovative solutions of the interior decoration delivering both function and aesthetics, we generated a true thoroughbred of the sea, ultra-light and super performing, perfectly suitable for cruising as well as for racing."

The owner, who is an experienced yachtsman, briefed the yard to produce the most refined high performance solution to the box-ruled Wallycento racer-cruiser. Naval architects Mills Design helped to achieve this by optimising the layout to reduce the weight, improving hull stiffness and centralising the heavy machinery to reduce pitching inertias. The new, more versatile hull shape allows for low drag in lighter conditions and increased stability when the wind whips up.

A standout feature is the cutting-edge deck layout that combines the flush deck and bulwarks of Esense with the ramp deck of Alegre. This gives the owner a functional race-ready layout that fits over the interior accommodation, as mandated by the class rules.

"Tango is our largest project to date and also we believe the most innovative, the most stylish, and certainly one of the most satisfying to develop," added Mark Mills. “We owe our involvement to the vision of Luca Bassani who suggested us to bring a fresh mindset to the Wallycento design.”

Tango will make her regatta debut at the 2017 Les Voiles De Saint Tropez, when she will take on the other Wallycentos — Galateia, Magic Carpet 3, and Open Season. Other sailing superyacht projects currently in build at Persico Marine include the 44.2 metre Wally 145, which is due to hit the water in 2019.