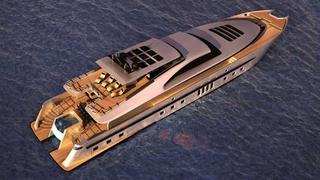 Franco Gianni has designed a 47m concept yacht intended to redefine the perception of catamarans as boats that offer performance without luxury.

‘The reason our office went towards catamarans originally was to show what these multihulls are really capable of,’ says Gianni. ‘In the past couple of decades nobody’s really done a large multihull with very fluid, flowing lines. They’ve always been these big expedition style boats, that are very nice, very seaworthy, but no-body’s ever been able to sit at the dock and compare them to the other luxury yachts. The public has been very hesitant about moving into these kind of boats because of that.’

‘We wanted to show a boat that would go anywhere in the world, do anything that you wanted it to, but yet was very stylish.’

Indeed, with exterior lines that convey a sense of power and aggression, and an attractive raised pilothouse, the SC 154 is a good-looking boat.

Inside, Studio Franco Gianni, which specialises in catamaran designs, intends to offer a fully customisable interior. She has room for six large guest cabins in one hull, leaving the other hull available for spa, gym, galley, cinema, crew mess and cabins. With large volumes throughout, Gianni believes the cat is particularly suited to entertaining.

‘It’s a very sociable boat. She’s designed to accommodate large numbers of people and would make a great charter boat. The amount of cabins you could have down below, the interior space I the salons and outside areas – it has great entertaining spaces,’ says Gianni.

The social potential of the cat has been remembered in every part of the boat. The large open fly bridge has two seating areas for entertaining and dining aft of the state of the art console, plus a centrally located bar. Behind the bar in an open u shaped aft deck there is space available for up to four wave runners.

The aft deck features extensive seating, another bar, one of the boat’s most interesting features, a centrally located 2.5m x 3m spa pool.

‘The beautiful thing about that is we want a clear glass aft of it, with a waterfall that would fall between both hulls,’ says Gianni, who is developing a method of creating this effect.

‘The garages on the aft of the engine room, we’ve got them opening up both ways, into the centre tunnel and outwards as well. Once research and development goes forward on the inside of that tunnel, we could launch tenders inside and outward as well,’ says Gianni.

‘It would mean being able to launch tenders in any kind of sea state. With a usual outboard launch, you have to have a relatively calm sea state in order to be able to do it. If it’s rough it becomes a very difficult process to launch the boat. We figure if we can launch it on the inside you could launch in anything.’

The SC 154 is designed as a long-range yacht and a transatlantic fuel range has been incorporated into the design. A shallow draft of 2m will enable her to enter shallow anchorages that mono hulls can’t cruise. She will feature for MTU 4000 engines coupled to water jets. The cat will feature an aluminium hull and fibreglass and carbon superstructure, but there’s an option of a full carbon/Kevlar superstructure that will give the yacht an even lower centre of gravity and reduce weight drastically.