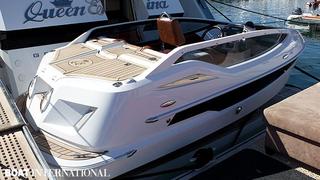 During my visit to the Polish yard Galeon in August, I noticed a small and special mould in one of their sheds. My host told me about a tender project but didn't give me more details.

A few weeks later, the mystery was solved when I visited the 24.5 metre motor yacht Queen Ekatierina during the latest Festival de la Plaisance of Cannes. This mould was created for their flagship's tender, called Baby Crystal.

Having some design details in common, this 4.45m full custom tender was fitted out like her mothership. It accommodates three passengers, the pilot being in a central position.

On the technical side, Baby Crystal is powered by a single 160hp engine linked to a waterjet, and giving a top speed of 38 knots.

Queen Ekatierina's stern was conceived to carry this tender, and her 700kg are easily launched thanks to the hydraulic bathing platform.

Galeon claims to be able to build what you want, and they proved it with this special owner demand.