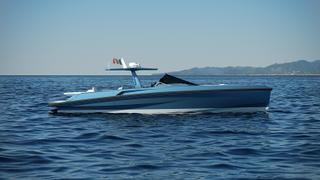 Ferretti Group boss Alberto Galassi has opened up about the company’s acquisition of Wally Yachts and revealed that the group’s portfolio is set to expand further.

Speaking to Boat International at the Boot Düsseldorf boat show, chief executive of the group Galassi revealed up to two more companies could join the group’s portfolio within two years.

“There is something we think we are missing,” he said. “We know exactly what it is. We think to completely fill the portfolio there will be one or two acquisitions in the next 24 months.”

He said the first acquisition would be “very surprising”, hinting that it is not “necessarily a shipyard." "It may be something else," he said.

Galassi revealed that conversations are already underway with one company, while the second remains “just an idea.” However, Galassi said he is prepared to wait.

“We are waiting for the stars to be aligned. For Wally, we waited for nearly 15 months. We are not in a hurry – we have many things to do in the meantime.”

Galassi reflected on the recent exclusive license agreement with Wally, which was announced to coincide with Boot Düsseldorf.

The agreement is a significant step towards the group’s full acquisition of the brand, which is set to complete in “a couple of months,” Galassi said.

He revealed that up to four 48 Wallytenders, the first model unveiled by the partnership, will be built this year.

“A completely new range of models” will then be announced at the Cannes Yachting Festival in September and one of these models will debut at the following Festival in 2020.

“You don’t invest €84 million unless you have a big plan,” Galassi said, referring to the Group’s planned investment in Wally over the next four years.

In the meantime, the Ferretti Group has begun its search for a dedicated Wally Yachts shipyard.

While Wally’s sailing yacht production will not be relocated, Ferretti Group only has enough capacity to build Wally’s unannounced range of new models for two years.

“In the future we do need a shipyard,” Galassi said. “We are looking everywhere. I still have no clue where we will go but definitely in the next six months we will have to come to a decision.”