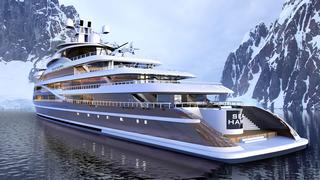 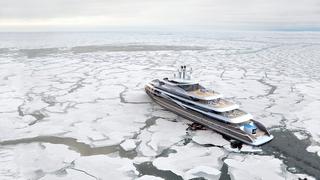 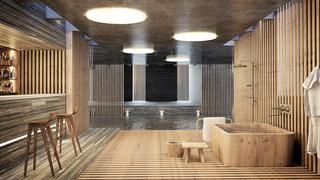 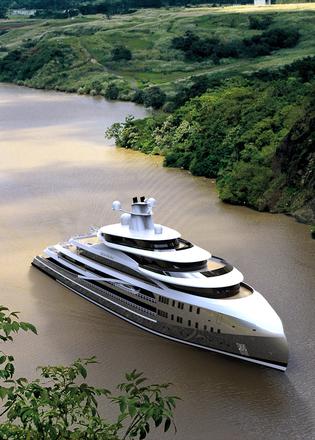 The Sea Hawk explorer yacht is designed to be built to Polar Ice Class 6 classification, which would make her capable of breaking through 80cm of new ice. At the same time, she’s ready for long-range cruising in other adventurous regions, such as trekking up the Amazon, with a range of 12,000 nautical miles and capacity for three months of provisioning storage.

Everything has been thought of for these remote voyages, such as ways to clean the side gates of mud and changing insect filters quickly – less than glamorous amenities that are all important when adventuring.

Diana Scott has penned the exterior lines of the new explorer yacht, giving Sea Hawk an eye-catching bow design. The exterior is full of windows and balconies, designed to connect her guests with the far-flung cruising grounds they are traversing. Naval architecture comes from Frank Neubelt and Caspar Andri Largiader. The hull is designed to be “ice friendly”, pushing smaller pieces of ice out of its way and breaking through larger pieces.

Sea Hawk is also backed by a team of ice and expedition experts, such as superyacht captain Matthias Bosse – who is a master mariner and an ice master and has cruised the Arctic Ocean, Antarctica and the Amazon River – and Polar Expert and explorer David Fletcher.

To combat the changing climates it will venture to, Sea Hawk will have heated door seals, oversized propellers designed to withstand ice and floating debris and heavy duty air-conditioning. The yacht will also be powered by diesel-electric propulsion, and can switch to the electric only option for use in environmentally sensitive areas.

“She’s designed to travel 2,000 nautical miles up the Amazon,” says Nick Lockett of Hawk Yachts. “The yacht will have a strengthened steel propeller. The prop could be hit with a log [on the Amazon River] and you’d be okay.”

Lockett explains that the yacht is designed to go anywhere, limited only in some places by the 5.5 metre draft, while still looking classy when berthed alongside other superyachts in Monaco.

The Sea Hawk yacht does boast superyacht amenities, such as a huge sauna, gym and massage room. A helicopter hangar with an adjacent bar is also a clever feature as it allows the hangar to be used as an entertainment venue instead of just a functional area.