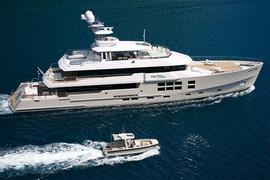 Cerion Energy’s GO2 diesel fuel additive, which is being exhibited at this year’s METS by ECOsuperyacht, its exclusive European distributor in the yachting sector, has been nominated for the highly prestigious DAME Design Award 2011.

GO2 has already attracted the interest of the judging panel for this year’s prestigious DAME Design Award and has been nominated for an award from among a total of 133 entries from 21 countries.

Richard Franklin, managing director of ECOsuperyacht says: 'Bill Dixon, chairman of the judging panel, has already said that the 2011 DAME Design Award entry list is one of the best they’ve seen in years and that it has been a real challenge trying to decide which products should be nominated for final judging. We appreciate that many of the past recipients of the DAME Design Award have themselves been ground-breaking products that set new standards for the industry, so we’re very excited indeed that GO2 has received a nomination.'

GO2 is a cutting-edge nanoparticle-based diesel combustion additive that provides a significant improvement in fuel efficiency while reducing emissions outputs for all types, sizes and ages of marine diesel engines. GO2 enables owners to dramatically reduce the impact of their yacht’s engines on the environment, whilst enjoying significant financial savings from increased fuel economy and improved enjoyment due to reduced visible soot and exhaust smells.

GO2 was recently trialled on a 62 metre motor yacht and the independently verified results show a 14% reduction in fuel consumption combined with a 69% reduction in unburned fuel (diesel odour) and a 35% reduction in soot (carbon particulate matter), together with significant reductions in CO2, CO and NOx.

ECOsuperyacht will be exhibiting Cerion Energy’s GO2 Diesel Fuel Additive in the Superyacht Pavilion at METS this year (15-17 November) on stand 10.421.