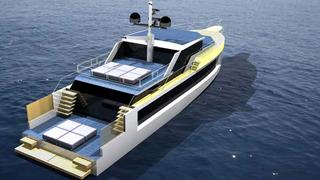 The Zero 80 was inspired by glamorous late 20th century boats from the south of France and Portofino, but the superstructure and engines are designed to limit the boat’s impact on the environment.

‘The wheelhouse is centred in the middle of the vessel, as it was in classic yachts from the 70s, but with a new interpretation,’ says Mattia Massola, who designed the Zero 80. ‘The idea is to create a boat that is really green, as much as possible.’

The yacht will have four diesel electric engines, which are more efficient and produce fewer carbon emissions than traditional shaft piston engines, as well as electric propellers.

‘The engines will have good insulation. There will be really low noise, and also far less vibration than with a traditional engine. It’s a comfortable vessel,’ says Massola.

The style of the superstructure also helps the boat to be energy efficient.

‘It’s inspired by the architecture of buildings – it’s quite square – this way we create more flat spaces where we can install solar panels. They will be used to help the electrical services of the boat,’ says Massola.

The aft owner’s carbon will have an 180 degree view through large windows, a central bathroom and direct access to the aft beach club. The Zero 80 will accommodate six guests and four crewmembers.