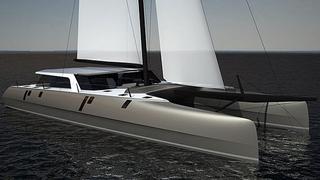 After the relocation this spring of the full production of Gunboat in North Carolina, the American yard announces the rebirth of the Gunboat 78.

Stopped two years ago, this 24 metre sailing catamaran remained stored in South Africa. Following the wish of her owners to restart this project, the empty hull designed by Nigel Irens was prepared to cross the Atlantic to Wanchese in North Carolina, where the yard has recently acquired an adjacent shed of 930sqm. Entirely renovated, it will be dedicated to the Gunboat 78 and future large projects.

The Gunboat 78 follows the yard's philosophy, being lightweight, practical and offering high performances even in light winds. Like all her sisters, she'll have a typical forward working cockpit between the helm station and the mast. And she will accommodate eight guests in four cabins including two equal masters.

Built in high-tech composite, the Gunboat 78 will have a maximum displacement of 29 tons. The rig and all spars will be in carbon, with a mast of 31.2 metres giving a maximum sail area between 310sqm (upwind) and 535sqm (downwind). Being developed by Nigel Irens, we can imagine an impressive future top speed...

Following her launch early 2014, the Gunboat 78 will become the second largest catamaran built by the yard. For the moment, the hull is in the middle of the Atlantic, with her arrival in the USA scheduled for early December.