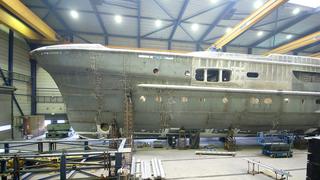 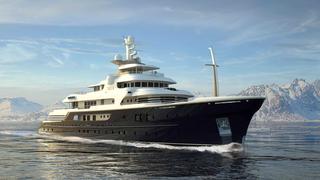 The 63 metre Hakvoort explorer yacht Project Zeus, currently in build with the Dutch yard, is for sale.

The explorer yacht is now for sale again, offering an opportunity for an owner to have the new build yacht with a faster delivery time. Currently known under the project name Zeus, hull number YN249 will be the largest yacht built by Hakvoort.

Project Zeus’s contemporary, curvy exterior is reminiscent of 1930s styling, designed by Rene van der Velden with a brief from the original owner to create a “modern classic with a difference.” Diana Yacht Design is responsible for the yacht’s naval architecture, while interior design will come from Sinot Yacht Design.

“He was very keen that the yacht should not be a repeat of anything else that is currently afloat but something genuinely fresh and bold,” says Van der Velden. “The owner admires a type of styling called streamlining, which was especially popular in the 1930s and 40s. A streamliner is a vehicle or vessel given a specific shape that reduces air resistance: Examples include the famous ferry Kalakala and the record-breaking car Bluebird. This is the first time streamlining has been so clearly integrated into the design of a superyacht.”

Built in steel and aluminium, she will be powered by twin Caterpillar 3512C engines giving a top speed of 14.8 knots and a cruising speed of 12.5 knots.

The location of tenders and the ease of launching them informed the interior layout, with two nine metre tenders taking up prime real estate on the main deck aft. The traditional main saloon has been nixed and the whole rest of the main deck given over to owner’s quarters, galley and captain’s cabin. The upper deck is dedicated to socialising, with one saloon forward and another aft, leading out on to an inside-outside lounge with a large al fresco dining table and an aft deck for lounging.

Aft of the wheelhouse on the deck above, a large gym can be opened up to offer outdoor exercise. The lower deck accommodates five guest cabins comprising one VIP, two double and two twin bedded cabin, as well as six crew cabins. Zeus will also house a beach club with lots of storage and a sauna. Twin Caterpillar 3512Cs will give Project Zeus a top speed of 15 knots and a cruising speed of 12.5 knots.

The keel laying of Hakvoort’s largest superyacht to date took place in late March 2014 at Scheepswerf Made, The Netherlands. The project stalled after her owner had to pull out. Hakvoort has been extremely candid about its challenges with the Russian market after two projects intended for Russian owners were put on hold.

Hakvoort faced a similar situation with its 61 metre Project Golden Age, which was recently sold to American owners after being put on hold by her initial Russian owners. In both cases, Moran brought the buyers of Golden Age. The interior of 61 metre Golden Age is now being revised for her new owners.

Like Golden Age, a would-be owner of Project Zeus has the same opportunity to come in part-way through the build and put their own stamp on the explorer yacht.