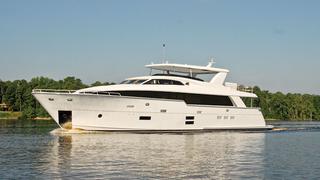 The debut coincides with a change in ownership for the yard’s 54-year history. In August, an affiliate of Versa Capital Management, a private equity firm based in Philadelphia, announced it had acquired Hatteras and Cabo Yachts from the Brunswick Corporation. Financial terms were not disclosed.

Brunswick had bought Hatteras in the Autumn of 2001 from Genmar for a reported $80 million in cash and Cabo, a builder of offshore fishing boats headquartered in California, joined the fold in 2006. Versa Capital Management has invested in everything from parking to restaurants and newspapers, but this is its first foray into the marine industry.

‘The sale process took a long time and a lot of effort,’ says Hatteras president and CEO John Ward. After months of waiting, the company has a clear path forward. ‘It is exciting for me and for the team,’ Ward says. About 300 people work at Hatteras’ 385,000 square metre waterfront facilities in New Bern, North Carolina.

While negotiations were underway between the seller and buyer, Hatteras forged ahead with construction of the new flagship. The 100 RPH was designed in collaboration with the studio Team For Design and features a bright interior with a country kitchen. The yacht has been sold and will be formally handed over to her owner at the show. Construction is also underway on the second hull in the series.

Ward says the Fort Lauderdale show will serve as a platform for the re-launching of the company, whose slogan will be ‘It’s all new.’