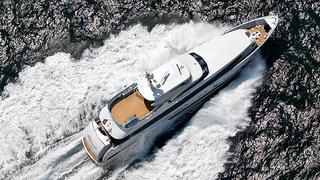 Heesen delivers motor yachts Galactica Plus and My Secret

Heesen Yachts has delivered two new yachts, Galactica Plus and My Secret.

Powered by twin MTU engines, she reaches a top speed of 27 knots and has a range of 1,400 nautical miles at 11 knots. The fourth yacht delivered by Heesen this year, Galactica Plus left the yard at the end of June.

The second yacht to be delivered comes from the successful 47m displacement series. Previously known under the project name California (hull 16347), she's designed by Omega Architects and the in-house team. Lloyd's registered and MCA compliant, she has a steel hull and an aluminium superstructure. The interior by Bannenberg & Rowell evokes a 1940s/1950s Californian style with bleached wenge floorboards, white elm panelling, and steel and marble detailing exuding the relaxed elegance of Hollywood’s classic era.

My Secret is powered by twin MTU engines giving a top speed of 15 knots and a range of 4,000 nautical miles at 12 knots. She is the fifth yacht to be delivered by Heesen in 2012.

Heesen Yachts is building 10 other yachts with deliveries scheduled until 2015.