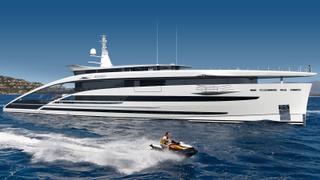 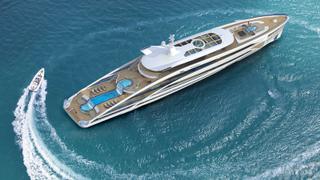 The prospect of a new Heesen flagship has been on the cards since its Oss headquarters was expanded last year and the yard’s ambitions were vividly laid out in a spectacular laser presentation at the Hotel Hermitage in which it was stated in no uncertain terms: “We will build bigger.”

Project Maximus is described as “a highly flexible platform”, due to its almost vertical bow, which allows for the maximum amount of interior and exterior space for the length. Key features include a huge superyacht spa pool, which is fed by a waterfall and accompanied by an adjacent fire pit.

“When compared with other boats of its size it has an enormous pool, huge external deck areas, and all with the same internal volumes as a normal 83 metres,” says Denn. “It’s large boat thinking that puts the owner’s needs first.”

Further details are being kept under wraps for now, but it is understood that three of the lower deck cabins can be combined through the use of linking doors to create one enormous suite.

The Dutch yard currently has 12 yachts under construction with delivery dates stretching in 2021. Referencing the recent sales of the 55 metre spec-built yachts Project Antares and Laurentia, CEO Arthur Brouwer added: “We see a trend for going bigger.”

Other designs unveiled by Heesen at the Monaco Yacht Show include the 66 metre steel-hulled Project Aventi, which was developed in collaboration with Winch Design, and a highly confidential 78 metre aluminium project.