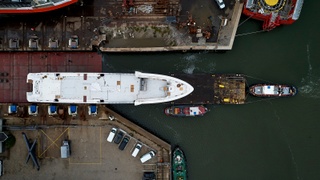 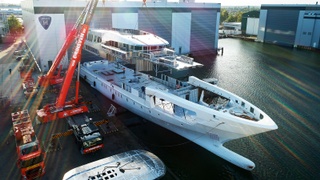 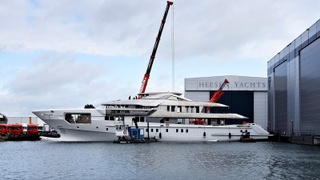 Dutch yard Heesen has revealed that it has joined the hull and superstructure on Project Falcon, its largest steel yacht to date.

The construction milestone took place on September 28 at the yard's Oss facility and the yacht remains on track for a 2021 delivery. It comes after the laying of the keel, which took place in September 2018.

The 60 metre Project Falcon, which was sold in February 2018, is also Heesen's largest yacht overall by gross tonnage with a 1,060GT interior.

For this new design, Omega Architects has struck a fine balance between contemporary exterior styling and a flexible 1,060GT interior that offer great views out to sea through full-height windows and over lowered bulwarks. Heesen previously explained that the amidships superstructure has been styled to resemble a bird's wing, visually integrating the upper three decks.

The interior design brief meanwhile has been handed to Sinot Exclusive Yacht Design. The result will be a "holistic" connection between the interior and exterior design and "the fluid indoor/ outdoor connection remains uninterrupted."

Accommodation is for up to 16 guests split between seven cabins, including an upper deck master suite with its own private aft deck, an upper deck VIP situated amidships, and a lower deck VIP with private access to a main-deck twin cabin. Four further lower deck cabins complete the guest layout, while the crew quarters allows for a staff of up to 14 people.

Power will come from a pair of MTU 12V4000 M65L engines for a top speed of 17.5 knots and a transatlantic range of 4,200 nautical miles when trimmed back to 13 knots, thanks to Project Falcon's ultra-efficient fast displacement hull form.

Project Falcon is one of 12 yachts currently under construction at the Oss based yard, with deliveries scheduled to span through to 2023.