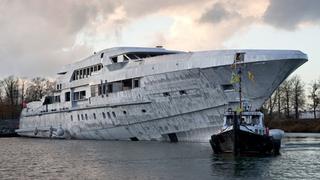 There's no stopping Heesen at the moment; fresh from the launch of Lady L, and the delivery of Serenity, comes news that their revolutionary new 65m fast displacement motor yacht (hull #16465) has hit the water for the first time and that the hull and superstructure have been joined together. This significant milestone came in December last year, 12 months after the keel was laid.

Her construction has involved a technique developed by NASA known as "friction-stir" which generates less heat and allows metal plates to be welded together without adding additional welding material, creating a smoother and much more uniform result.

Perry van Oossanen of Van Oossanen and Associates, responsible for the naval architecture, comments, "To see the high level of quality Heesen has put in the hull construction, and it being combined with the superstructure for the first time, is very thrilling.”

The slenderness of this new "Fast Displacement Hull Form" (FDHF), developed by Van Oossanen, results in a very low wave profile at both low and high speeds, making it approximately 30% more fuel efficient compared to traditional hard chine and round bilge hulls, while also improving its sea-keeping and maneuverability.

Frank Laupman of Omega Architects who was responsible for the exterior design, comments, “I can finally see that the lines I sketched on paper more than two years ago, work in reality.”

Given the size and significance of this project, there is understandable excitement amongst those involved. Dickie Bannenberg of Bannenberg and Rowell Design comments, "We can’t wait for our interior to go in.”

Alongside a video promoting the new hull form, Heesen has published a time lapse video showing the various stages of construction to date:

Hull 16465 is now in her fitting-out shed, which has been especially enlarged and upgraded. Her delivery is scheduled for June 2013.