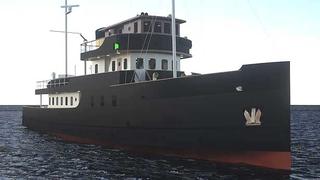 One of the most prominent names in historical yacht design has drawn a unique new superyacht that will put it back at the cutting edge of international boat design, and reawaken an appreciation of its design heritage and ethos.

Established in 1896 by Alfred Mylne, Scottish firm A Mylne & Co is the oldest continually designing naval architecture office in the world, and was responsible for producing some of the finest Edwardian yachts of the pre-war years - among them Kelpie (1903), Sea King (1918), Mariella (1938) and Panda (1938). Now Mylne has gone back to the drawing board to design a 36 metre explorer yacht with classic looks and circumnavigation capability for a Swiss industrialist, who is an experienced yacht owner.

Mylne was chosen not only on the strength of its 115-year yacht-design pedigree but also because it can offer the very latest in design technology - thanks to its acquisition by established Fife naval architects Ace Marine in 2007. The brief for the project - code-named PF-36 - meant the yacht had to be as tough, reliable and environmentally friendly as possible, while still encompassing a traditional style to suit the client’s tastes.

Mylne analysed thousands of hull variations to find the most efficient hull form and produced a design that uses less than half the fuel burn of a modern equivalently sized vessel. The optimal target fuel consumption is 30 litres per hour at 10 knots - initial analysis results which have been confirmed by tank testing at Glasgow University. The hull form also reduces slamming and pitching motions, while active fin stabilisers minimise roll.

With a beam of 7.2 metres and draught of 2 metres this 'single screw gentleman’s motor yacht' will be built of steel to Lloyd's Ice Class rule requirements, with an aluminium and teak deckhouse. It will be powered by a 600bhp Grenaa diesel engine to a top speed of 13 knots, and have a range of over 5,000 nautical miles at its optimal cruising speed of 10 knots.

A specially developed and engineered skysail will be fitted to take advantage of wind power during long crossings and the yacht's other green features will include a wind generator, LED energy efficient lighting, and extra thermal and acoustic insulation.

The yacht's traditional exterior styling belies a raft of modern design elements. Nearly every component will have a dual purpose, and nothing fitted for the sake of adornment. From the original Hastie steering pedestal on the bridge, to the recycled ship's windows fitted throughout, it will be an ingenious combination of new and old.

Scottish firm Malcolm Duffin Design has picked up on this theme in the interior design, which will combine traditional elements with lighter, more contemporary colour tones. 'The principal idea behind the interior style is that this is a classic gentleman's yacht,' says Malcolm Duffin, and to that end inspiration has been drawn from the sailing yacht interiors of the Edwardian era with widespread use of traditional raised-and-fielded panelling in teak or opepe (a tropical hardwood), chalk white tongue-and-groove boards in the saloon, and a purist approach to unnecessary ornamentation, which leans towards what Malcolm Duffin terms 'Scottish austere'. The overall feel is masculine and restrained yet elegant.

The layout is conventional to a point - the main entrance on the starboard side of the main deck opens into a small lobby, aft of which is a large main saloon and dining area, with the galley amidships and forward of that one of the more unusual features - twin master cabins with their own en suites. From the saloon a door leads to the aft deck, which is completely shaded by the upper deck. Built-in banquette seating and two teak tables will make it a pleasant area for alfresco dining and relaxing. Stairs lead down from the aft portside corner of the saloon to the guest accommodation on the lower deck where there will be two, possibly three further guest cabins, one of them a full beam double with en suite.

The engine room is amidships and forward of that generous crew quarters for eight - although the exact balance of guest and crew accommodation has not yet been pinned down. The upper deck deckhouse, which can be accessed via an interior staircase or exterior stairs on either side, contains the captain's cabin, which has access to the bridge above, and another of the yacht's unique features – possibly a first for a superyacht - a whisky room stocked with the finest malts. This nod to the craft’s Scottish heritage will have a clubby gentleman's smoking room feel to it, and is a fitting feature for such an old-world style yacht.

The latest technology in alarms monitoring and control will also be incorporated. Concealed within drawers throughout the yacht iPads will allow access to navigation charts, speed and heading, tank levels, engine and generator status, interior and exterior lighting, audio visual entertainment, and even the underwater dolphin-watching camera mounted under the bow.

The contract for building the yacht has not yet been awarded but Mylne is exploring options in the UK, China and Croatia. The build is expected to start later this year with delivery likely in 2013. Mylne is also in the process of sourcing local Scottish suppliers and cabinetmakers to provide the fixtures and fittings for the vessel, which will help to retain its Scottish feel and pedigree.

A new era for Mylne

PF-36 is Mylne's first new design for 30 years and one which director David Gray hopes will 'put the company's name back on the map'.

'We are delighted with this new project as it is very much in keeping with the whole ethos of Mylne,' he said, 'It’s the culmination of the hard work we’ve been putting in over a number of years to revive Mylne.'

Mylne has big plans for the future too. In the pipeline are designs for a range of leisure boats that reflect the classic Mylne style cues. 'We believe there is a market for them all around the world due to the very strong heritage of the brand, so it’s a very exciting time for the business,' said David Gray, who when he bought A Mylne & Co four years ago, incorporating it into Ace Marine Ltd, undertook the task of cataloguing and digitising the entire Mylne archive of over 10,000 drawings and documents of a wide variety of classic boats.

The company now creates boats according to these timeless designs - among them classic style sailing yachts such as the schooner rigged 30 metre Panope, and the 33.5 metre Thendara – but its most ambitious plans are for new custom yachts using the famous Mylne style. Currently on the boards is a smaller 28 metre version of PF-36, and a more conventional 50 metre superyacht, which was designed by Ace Marine but ultimately not built because of the economic downturn. David Gray intends to rework it, this time with Mylne hallmarks.

But sailing ahead of them all will be the PF-36 flagship, a first of class whose design will be made available for future owners to put their own stamp on.