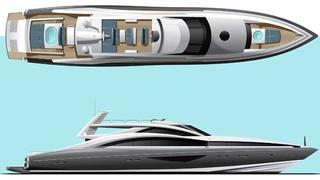 Hodgdon have unveiled their 40m Michael Peters-designed yacht concept, whose form was inspired by the silhouette of an early race boat.

This single line form of the race boat was developed into a sleek, dramatic and faintly retro aesthetic that Peters is well-known for. Indeed his work on both the Chris Craft 28 and the Hodgdon Limo Tender, covered in this magazine, both have this feeling: ‘They’re both retro looking, but they’re modern – in the sense that they’re modern boats on modern scales – but from a distance they have the flare of a classic boat,’ says Michael Peters, founder of Michael Peters Yacht Design.

In a similar way, this 40m design is decidedly modern in its layout, and Peters has protected owner privacy by considering the way the yachts are used today.

‘We looked at the feeling of the boat that the owner wanted and one of the things that was really important was a sense of private owner space,’ says Peters.

‘Many of these boats spend a lot of their time docked stern to, in places like Monaco – the aft deck is really not a private space at all. So you make that an entertaining space and if you want to have some privacy you put the owners area forward,’ he says.

Indeed, the main deck features full beam owner’s cabin with large en suite and private access to the foredeck owner’s ‘amenity’ deck with a spa pool and sun pads. Aft of this lies the galley, main saloon and dining area, and further aft a large deck space for socialising, with sunpads, a big spa pool and an area for al fresco dining. Guest accommodation is on the lower deck, while there are sunpads up on the flydeck.

This cantilever-style raised pilothouse, along with the concept’s aft bustle, required a builder who could do justice to their complex shapes. Peters feels Hodgdon has the experience to do it justice.

‘If you have design but you don’t have quality, you don’t have anything. It’s only it you watch the quality that a design will come to life the right way,’ says Peters.

But while Hodgdon is the oldest US yard, with 200 years of experience, it was the builder’s expertise in modern composites that has made them particularly suitable to this build.

‘In terms of shapes it is very complex, and it would be very complicated to build in aluminium, it needs to be built in composite,’ says Tim Hodgdon, CEO of Hodgdon Yachts.