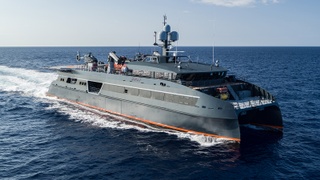 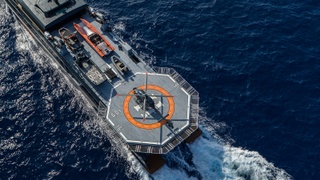 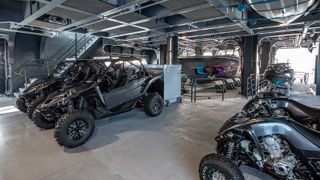 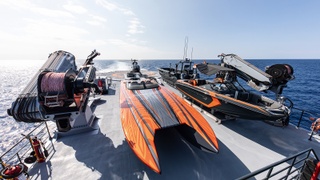 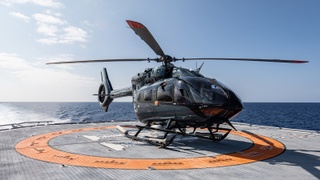 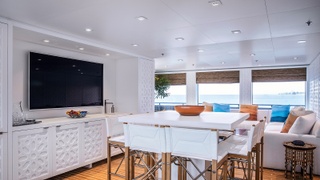 A 66-metre catamaran is now functioning as the world's largest floating toybox. Simon de Burton steps on board Hodor to look at the owner's collection of jet skis, tenders and bikes.

What to do when the decks of your superyacht can’t accommodate your favourite playthings? The owner of a particular 87 metre (that we have promised not to name) has solved this conundrum by commissioning what could fairly be called the world’s largest floating toy box.

I have little idea of what to expect of Hodor when I arrive on Ibiza, but when I clap eyes on this behemoth, upon rounding the headland after a quick RIB ride from the famous Blue Marlin beach bar, my jaw actually drops. With stealth-grey paintwork lightened by a vibrant orange stripe, she could easily be mistaken for a warship ready to steam into battle – were it not for the colour-matched Airbus H145 helicopter and similarly liveried and conspicuously large tenders dotted about the upper deck.

“The idea was to get all the clutter off the mothership and on board a dedicated vessel – and the Incat Crowther catamaran platform provided the perfect answer,” says Hodor’s first officer, Troy Eriksson, after welcoming me aboard.

Australian naval architect Incat Crowther is better known for designing high-speed catamaran ferries than receptacles for fun objects that fly, drive, oat and dive, but all that could change with the creation of Hodor, the first of a new breed of “shadow cats” designed to make the storage, maintenance, launch and recovery of superyacht toys as efficient as possible.

Based on Incat Crowther’s all-aluminium 55-metre fast ferry platform, Hodor was created by stretching the standard hull by 11 metres and then fitting it out to the exact specifications of both the owner and the full-time crew of 17, who manage her on a day-to-day basis.

“The fact that the boat has two hulls and is based on a commercial vessel means there are huge load areas and storage spaces,” says Eriksson, “so there was no need to restrict the quantity of toys we put on board. The owner just let us go ahead and fill it with cool stuff.”

Indeed, there is so much cool stuff aboard Hodor that it takes more than an hour to walk around her. In the huge garage below decks I discover she is carrying nine jet skis, four Yamaha quad bikes, two Yamaha side-by-side ATVs, four Yamaha TW200 trail motorcycles, two Laser dinghies and one Hobie Cat. The leftover space is already earmarked for a soon-to-be-delivered Seamagine Aurora-3 submersible.

The larger items, however, are stowed elsewhere. Resting on cradles atop a hydraulic lift that drops between the hulls for instant launching is the biggest beast of all, a 17-metre Nor-Tech 560 Sport centre console. It was the safe handling of that particular boat that steered the construction team to Incat Crowther. “We looked at every other possible option,” says project manager Robert Smith, of YCTS, “but the big issue was always the Nor-Tech – loading it on and o another boat is a very serious business that needs to be treated with respect. Incat Crowther’s existing catamaran design meant we didn’t have to reinvent the wheel, because it’s so big and stable that it allows such manoeuvres to be carried out in safety.”

Incat Crowther was willing and able to adapt its platform. As Dan Mace, its technical manager, says: “We have a number of vessels with fast launch and recovery systems, which we simply scaled up to a suitable size to allow the chase boat to be launched easily and quickly between the catamaran hulls. The submarine garage is housed in the centre of Hodor, and its launching system uses air casters to locate from the garage to the beam cranes.”

It’s amazing what else has been accommodated. On the top deck are a 7.3-metre Novurania catamaran RIB, a nine-metre Metal Shark landing craft, a 16-metre Hydra-Sports 53 centre console sports boat with quad Seven Marine 627 engines, a Ski Nautique and an insane 388 Skater race boat, capable of a genuine 240km/h. This selection of toys will keep even the most easily bored guest amused for weeks.

But the fun does not end on the water. Within the two voluminous hulls is a dive room stocked with oxygen, Nitrox and compressed air. In case of emergencies, Hodor also has a decompression chamber, stretcher and triage area. To support the fleet of toys is a petrol room capable of holding 7,500 litres of fuel and an engineer’s workshop.

Since the boat will function as a toy-carrying shadow vessel, there are only two interior guest areas – a small but luxurious lounge, which can be accessed directly from the tender dock, and two spacious bathrooms intended for anyone who might want to freshen up. Oliver Design, the Spanish studio, was responsible for the modular interiors used to complete the fit-out at the Astilleros Armón yard in Burela.

Despite the fact that the seating area is likely to be used only briefly, it is equipped with top-grade furnishings, a fully stocked bar and plasma television, while its walls, and those of the staircase that accesses it, are clad in fretwork Corian panels that have been meticulously laser-cut with a Moorish design. The remainder of the accommodation is dedicated to the crew who, thanks to the commodious nature of the catamaran layout, get to enjoy light-filled, open-plan communal areas and generous cabins with full-sized bathrooms. “[The owner] asked for the crew’s input in order that we ended up with a boat that we would all love to live on and work on,” Eriksson says.

Hodor might be the first of its type, but its creation has already brought Incat Crowther further orders. “The demand for shadow yachts is increasing as owners see the opportunity to have a broader range of yachting activities and options, without the need for a larger mothership,” Mace says. Let’s be glad that there are still people around who aren’t afraid to think big – really big – when it comes to having fun.

All images courtesy of Clint Jenkins.

A lifelong Dream: On board the breathtaking 106.5 metre conversion

Amadea: On Board the 106m Lürssen Superyacht

Reinventing iconic: On board the 33.5m Riva 110' Dolcevita