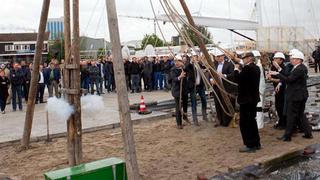 Dutch superyacht builder Holland Jachtbouw has broken ground on a new construction project at its yard at Zaandam on the outskirts of Amsterdam that will result in a brand new 60m build shed and the extension of its main construction hall to 55 metres.

Phase one of the project is due to be complete towards the end of 2014, when space is needed to accommodate two new build projects – a 46m Bill Tripp sailing yacht and the Dykstra-designed 51m schooner, Rainbow II.

Bright, glass-fronted offices will also be constructed between the halls to provide a clear view of the projects in build, as well as the company’s 120m of waterfront.

Roeland Franssens, MD at Holland Jachtbouw, says, ‘This new construction in the shipyard is in part due to our new build projects coming into the shipyard later this year. We need more space to accommodate further refits and additional new build projects in 2015 and this also provides a “bird’s eye view” for the managing project teams.’