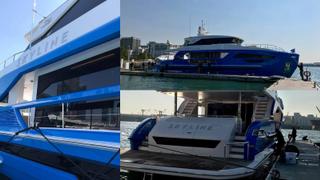 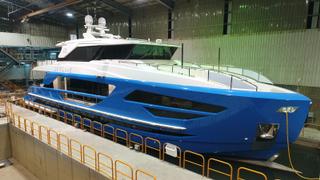 The new Horizon Yachts 27.45 metre Skyline has been launched in Kaohsiung and will now begin her pre-delivery sea trials. American distributor Horizon Yachts USA have also announced that the new model will go on display at the 2018 Palm Beach International Boat Show.

This fast displacement yacht is the latest in the Horizon FD range, which also includes the FD102 and FD85 models. The latter was used as the basis for Skyline, which is 0.38 metres longer and so has been designated an FD87 yacht.

Exterior styling is by Dutch naval architect Cor D Rover, while the in-house team at Horizon created the high-performance wave-piercing bow and the interior décor. Horizon Yachts added that the blue hull finish and contrasting white superstructure were both built from GRP.

Accommodation is for ten guests split between five staterooms including a main deck owner’s cabin, three double suites and a twin room. Crew accommodation on board Skyline is suitable for a staff of up to three people.

The saloon features an open plan layout — the lounge is situated aft of the formal dining area with seating for ten, while a large breakfast bar allows for seamless service from the amidships galley. However, the star of the show is the superyacht sundeck, with its enclosed skylounge and spacious aft deck.

Power will come from a pair of 1,136hp Caterpillar C18 ACERT diesel engines for a top speed of 16 knots. The total fuel capacity of 13,170 litres should ensure a decent range at Skyline's cruising speed of ten knots.

Other superyacht projects currently under development at the Taiwanese yard include the 35.05 metre Horizon CC115 and the fifth hull in the Horizon FD85 series, both of which are due for completion this year.