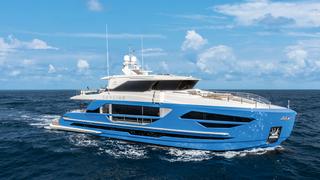 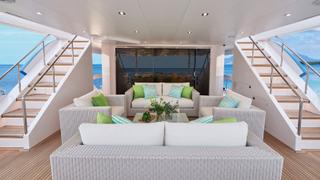 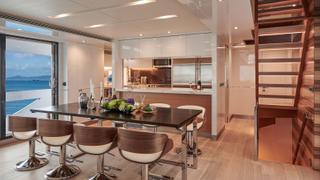 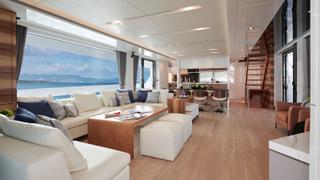 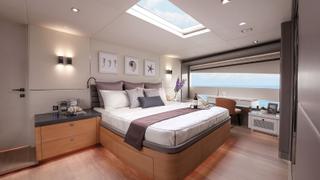 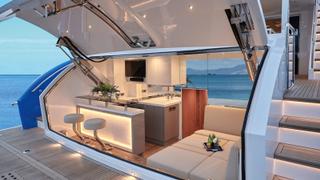 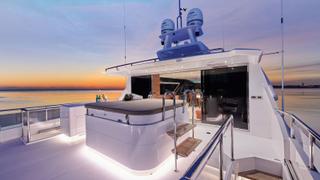 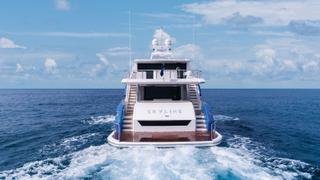 Skyline: The 27m Horizon yacht with plenty of added extras

This exacting Generation X owner shouted “More, more, more!” – and Horizon Yachts delivered, packing everything from an upper saloon to a beach club into a 27.5 metre model, finds Kate Lardy...

Skyline lies alongside in Horizon City Marina, Taiwan’s only private yacht marina, dressed in a polarising blue hull. Some of us instantly love the colour; some, well, not so much. I am in the former camp. I find it a cheerful beacon against the greyness of Kaohsiung.

I have travelled halfway around the world to see the yacht at Horizon’s open house event, where Asia’s top yacht builder shows off new models while fêting its dealers and clients from around the globe.

Skyline’s owner, Travis Fox, hails from my neck of the woods, Florida, and I am a bit taken aback to realise that he is my age, a Gen X-er – just a much more successful one. He is at the perfect point in life – established enough to have built a company but young enough to indulge his explorer dreams with his wife and teenage daughters.

The Fox family got their feet wet, so to speak, with a 16.2 metre Azimut Magellano, designed by Cor D Rover, that they took to the Bahamas. But, as Fox puts it, “You know that joke that a boat loses a foot every day you’re at sea? Well, after two months, it was really tiny!”

So he went shopping at the 2016 Fort Lauderdale International Boat Show, where among the 18 builders he visited, he came across Rover’s Fast Displacement designs at the Horizon display. Already a fan of the Dutch designer’s work, he was attracted to the drawings of the voluminous FD85. But he wanted more.

“Americans always amaze me,” Rover says. “We thought this is the biggest boat you can have with 85 feet [26 metres], you can’t get any bigger, and the first question he asks me is ‘Can we have a sky lounge [upper saloon]?’”

But that wasn’t all – he also wanted a beach club, a bigger galley and a substantial foredeck lounge. With an engineering background, Fox has the ability to visualise more than your average yacht owner, a useful skill considering his vision entailed a complete redesign. When I ask what specific input he had, I get only laughter from all parties. “Everything,” is the succinct answer. “Just look at my email inbox,” says Roger Sowerbutts, head of Horizon Yacht USA, who worked with the yard, Rover and Fox to create what has become a new model in the FD series, the FD87.

Apparently the thousands of emails this took didn’t drive him nuts. “That’s the way we improve,” Sowerbutts says, “by listening to our clients.” Watching his and Fox’s easy camaraderie at the open house, I believe him. “At this stage of the process, most people are pretty stressed,” Fox says. “I am actually going to miss these guys.”

The most obvious difference between the 85 and 87 is the enclosed bridge, which turns the raised pilothouse into a tri-deck. This frees up space on the main deck for an athwartships galley open to the saloon, instead of the 85’s portside closed one. If desired, the 87’s galley can also be concealed with a hidden door on the port side and a glass partition that rises over the counter.

The upper saloon, Fox’s favourite spot on board, adds 46.5 square metres of living space. Behind the helm is a new spin on wheelhouse spectator seating – a bar where those seated have a forward view under way, hopefully with something on the rocks in hand. Aft of this is a lounge area that leads outside to a bar-fronted spa pool and grill.

Sowerbutts’s favourite place is on the other side of the bridge tucked beneath its forward-raked windows: the foredeck. The impressive al fresco lounge has several sofas and tables that can be covered by a sun shade, in addition to a purposely sunny sunpad forward.

The extra half a metre went into the stern to incorporate a beach club. Kept as close to deck level as possible, the sunken space is two steps down. First seen on the Horizon E88, this club takes the concept to the next level, Sowerbutts says, estimating it at twice the size. It features a modern glass-topped bar fronted by a backlit panel, a kitchenette, television and lounge area that converts into a table and seating. Fox enlarged the windows in the transom door to make this a usable space under way.

The double staircases that lead from the hydraulic swim platform to the oversized aft deck and up to the top deck are features of the original FD85 design. They’re unusual on a boat of this size, as Sowerbutts points out, but you can’t deny the functionality and the wide seven metre beam supports them without infringing on the aft deck space.

Huge expanses of glass are another highlight of the FD series. They make an immediate impact when you enter the saloon, and the floor-to-ceiling port and starboard sliding doors in the dining area only add to the effect. This concept of fresh air flow is repeated in the upper saloon, which can be even more breezy thanks to a sliding sunroof.

As on the 85, a full-beam master lies forward on the main deck, flanked by low windows that put the owner right on the sea, and four additional suites are below, where Fox also requested larger windows.

The hull that gives the Fast Displacement series its name is a versatile tunnel design, transitioning from a hard chine forward to a soft chine amidships and aft and delivering lower resistance over a range of speeds. Its real secret, however, is its High Performance Piercing Bow, or what Horizon CEO John Lu jokingly refers to as the Pinocchio bow. Developed by Rover and Horizon, the submerged protrusion lengthens the waterline and has a sharp entry to reduce underwater currents and dampen pitching in a head sea. Tank testing and CFD show it offers a 10 per cent decrease in resistance and fuel consumption over a traditional planing bow, resulting in higher efficiency and greater speeds. With 1,136hp Caterpillar C18s, Skyline tops out at 16.6 knots.

The interior design – a collaboration between Horizon’s in-house team and the owner – is light and contemporary with white oak flooring in lieu of carpeting throughout and cool pale grey lacquer walls, which are softened by white vinyl headliners and wall panels. Satin-finished anigre adorns the main and lower decks, while the upper saloon features a darker walnut. Accent walls of striped Australian red gum and the backlit ceiling panel in the guest foyer add unexpected touches.

All of this was accomplished in a mere 14 months between the 2016 Fort Lauderdale International Boat Show, where Fox first saw the FD85 plans, and my sunset cruise in Kaohsiung’s enormous harbour at the open house.

Skyline – the name is a tribute to her builder – was shipped to Florida for the Palm Beach International Boat Show in March, then she will take the Fox family anywhere from the Virgin Islands to the Great Lakes.

In true adventurer style, Fox himself will be at the helm as he plans to run with only his family for crew. With 27.5 metres of boat, this seems possible, perhaps pushing the limits of owner-operating due to her huge volume, but a manageable length for securing marina slips.

You might say Fox represents a new age of owner: knowledgeable, energetic and hands-on with both the build and running of his yacht. He found a receptive builder in Horizon and talented designer in Cor D Rover Design – a mutually beneficial relationship that has given Horizon an exciting new model that it has already sold to another owner.

Pigments of the imagination: The most colourful superyacht exteriors