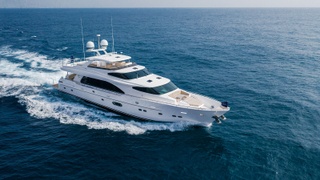 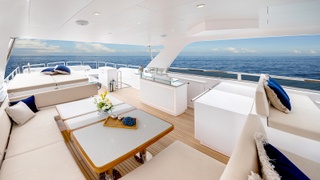 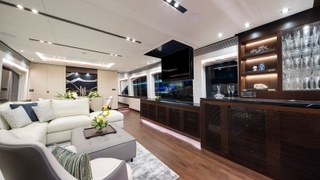 Based on the yard’s RP97 platform, the RP100 was launched from Horizon’s Kaohsiung facility.

Featuring “sleek styling”, the yacht has been customised specifically for the Australian market and features an open flybridge and traditional configuration.

This sees a spacious main saloon lead into a formal dining area with a country-style galley forward.

The raised pilothouse includes a built-in settee while U-shaped seating and a dinette sits on the open flybridge alongside a wet bar, grill and davit for launching the tender.

Four staterooms for eight guests sit on the lower deck, with the full beam master amidships, a VIP at the bow and two twin cabins to port and starboard. The crew quarters meanwhile allows for a staff of three.

The interior is furnished with “rich Wenge wood in a satin finish” for an “atmosphere of casual elegance”, the yard said.

The RP100 will have its debut at the Horizon Open House later this month after which it will be delivered to its Australian owners.