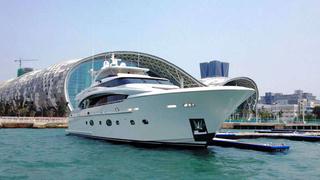 Taiwanese builder Horizon Yachts has announced the launch of the second superyacht in its RP110 series, named Carnival Liberty 3.

The semi-custom 33.5 metre Raised Pilothouse 110 model has been developed by Horizon in collaboration with designer JC Espinosa and naval architect Donald L Blount. The double chine hull provides added stability, and she has a small 1.83 metre draught for cruising in shallow waters. She shares the same engine package as her predecessor, powered by twin 1,900hp Caterpillars to a cruise speed of 18 knots and a max speed of 22 knots. Her range is 1,700 nautical miles at 11 knots and 650 nautical miles at 17 knots at half load with a 10 per cent fuel reserve.

The launch of hull No 2 in Horizon's new RP110 series comes right on the heels of its first, superyacht Andrea VI, which was tailored for her experienced owners specific brief. Likewise, the second RP110 has a number owner-specified customisations and stands out from the first yacht in the series, mostly in regards to her layout. The owner of Carnival Liberty 3 opted for an on-deck master stateroom and five staterooms in total, an aft tender garage and crew accommodations set forward on the lower deck, sleeping a total of six crew members. Guest staterooms on the lower deck include mirrored VIPs amidships with a Jack and Jill bathroom and two twin berth staterooms forward with separate bathrooms.

Her tender garage, accessed via a hydraulically operated door, also hosts a work bench, bathroom and a storage. Just off the garage is a hi-low swim platform that lowers for easy water entry. The aft deck of Carnival Liberty 3 also differs from Andrea VI; while the latter had a relaxed, lounge style seating arrangement, the new yacht has a more formal set up with a dinette for al fresco dining. There is also a bait well to port ready for fishing adventures, and access to the tender garage to starboard.

Carnival Liberty 3's main saloon features built-in seating, and a focal point is her step down bar to starboard. The galley set up is different on RP110 hull No 2 as well, set on the starboard side giving direct access to crew. The new yacht also sports a new flybridge layout, with two distinct seating areas aft and an al fresco galley and bar set just behind the bridge.

Carnival Liberty 3 will make her public debut at the Taiwan International Boat Show 8 to 11 May, 2014.