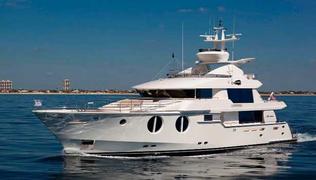 A Horizon CC105 explorer yacht was delivered to her new owner yesterday after being sold to him by Horizon Yacht USA with Simon Gibson at Worth Avenue Yachts representing the buyer. 'The Horizon team welcomes the new owner of the CC105 to the Horizon family, and we wish him relaxed and enjoyable cruising on his new Horizon yacht,' said Roger Sowerbutts of Horizon Yacht USA.

Built to DNV classification, the CC105 explorer yacht made her USA debut at the Palm Beach show in early 2012 and is powered by twin CAT C18A 600hp engines and also has zero speed stabilisers, bowthruster and a custom Furuno Navigation Package.

With an 8m beam the yacht has immense interior volume and is laid out with five cabins, including a main deck master suite, and separate crews quarters.

The new owner and his family intend to cruise the Horizon CC105 yacht in the Caribbean and eventually the Mediterranean.