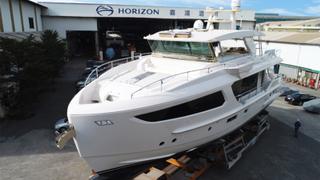 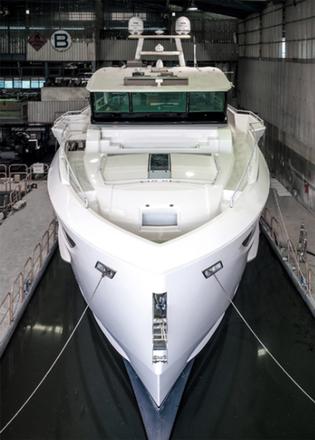 Horizon Yachts FD77 launched and shipped to US

The first model in Horizon Yachts' fast displacement series, the FD77 Skyline, has been shipped to the US ahead of her world debut at the Palm Beach International Boat Show later this month.

It comes after the first 24.54 metre model underwent sea trials in January at the Taiwanese yard.

It has been penned by veteran Horizon designer Cor D. Rover and has been specifically designed to accommodate owner operation.

The yard previously revealed that three models of the new line were under construction. This model is for the American market, while the others are being built for the European and Australian markets respectively.

The first hull features a four-stateroom layout with a folding glass balcony door in the saloon and large sections of glass throughout. The large floor-to-ceiling windows, meanwhile, characterise the FD series along with Horizon’s high-performance piercing bow design.

The interior design has been described as "elegant and modern" with wood flooring, white oak wall panelling and "sumptuous furnishings".

It also includes a "floating staircase", which leads to the open bridge above and three staterooms below. The model features an open bridge, which an enclosed version is also available. A large beach club area sits aft.