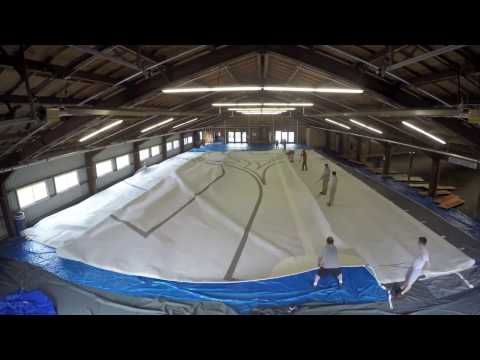 Video: Doyle reveals how Sailing Yacht A’s sails were made

American sail manufacturer Doyle has released a behind-the-scenes video that shows how the sails on the 142.81 metre Sailing Yacht A were developed.

Currently undergoing sea trials off Gibraltar prior to her final handover, Sailing Yacht A was built at the Nobiskrug yard in Germany, where she was fitted with the world’s largest carbon masts. Equally important are her colossal sails that have been designed to cope with extreme weather conditions.

As this video shows, the three sails were bonded together at the company’s facility in Salem, Massachusetts, before they were carefully adorned with the yacht’s emblem.

The sails were hoisted for the first time last year during sea trials off the coast of Kiel, giving us the first glimpse of the full scale of this monumental project.

Commissioned by Russian entrepreneur Andrey Melnichenko, Sailing Yacht A is one of the largest superyachts ever built. Full details of her interior are yet to be disclosed, but it is understood that she will feature an underwater observation pod and cruise at 16 knots, topping out at 21 knots.

Styled inside and out by the legendary Philippe Starck and developed in collaboration with Dykstra Naval Architects, she is one of the most iconic superyachts in the world, making headlines wherever she goes.

Sailing Yacht A is yet to be pictured with all three sails aloft at the same time, but yacht spotters around the Mediterranean will be keeping their eyes peeled for that historic moment.