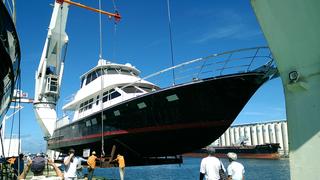 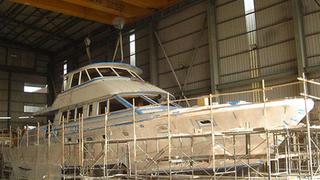 The Downeast yacht grows up: Hunt Yachts launches its Hunt 80

Hunt Yachts has launched its largest yacht yet, the 26.5 metre Hunt 80 Sport motor yacht. The Hunt 80 has been commissioned by an experienced yachtsmen who also has a smaller Hunt Harrier day boat.

The Hunt 80 was launched at the builder’s Asian production facility and is being delivered to the US. The flagship of the Hunt Ocean Series, the Hunt 80 brings the US yard into the smaller end of superyacht sector for the first time.

Hunt Yachts marry classic Downeast yacht styling with high-performance hull forms designed by C Raymond Hunt Associates. Like her sisters before her, the Hunt 80 features the signature Hunt deep-V hull, designed for a dry and comfortable ride at high speeds. Powered by two 1,600hp diesel engines and Hamilton water-jet drives, the Hunt 80 should hit a top speed of 31 knots.

Hunt Yachts announced that it would be building its largest yacht yet in in January 2014. In March this year, Hunt released in build photos of the Hunt 80, showing the flybridge – which is “well appointed and air-conditioned” – and custom sun deck in place. The semi-custom yacht will feature frameless window to maintain a clean profile.

The Hunt 80 features a three-stateroom layout with a full-beam master stateroom. There is also a bunkroom that can be used a supernumerary cabin for a nanny or staff, or can be used to accommodate children. Crew quarters comprise a double-berth captain’s cabin and another bunk cabin. The galley, main saloon and dining area are on the main deck, which opens out onto the aft deck.