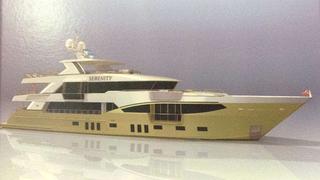 With the contract signed this summer, IAG Yachts debuted the design and shared more details for its newest yacht at the Fort Lauderdale boat show – the Noble Star Terrazza 133-foot custom motor yacht.

The luxury yacht features exterior and interior design by Evan K Marshall and engineering consultation by Axis Group Yacht Design. IAG's move to bring on such experienced naval architects and designers speaks to its commitment to grow the quality of its offerings. 'We want to build really high quality yachts,' says Michael Chang, president of IAG. We don't want to just build a boat, we want to build people's dreams.'

In the case of its latest yacht in build, the 133ft custom Noble Star Terrazza is being custom built for a very hands-on American owner. 'The fun thing about the client is he has a lot of ideas and is really involved and loves sketching his ideas,' says Marshall. 'Since he has a lot of ideas he pushes us to consider features the shipyard wouldn't have considered for a spec boat, like the enclosed balcony on the skylounge, for example.'

This floor-to-ceiling enclosed balcony off the skylounge on the aptly named Terrazza yacht is a stand-out exterior feature. The balcony will host a seating area looking out from the skylounge, giving a veranda-style view from above. 'Balconies that don't require being opened up and folded down is something we will see more of,' Marshall says.

Marshall describes the superyacht's exterior as, 'a contemporary boat with combination of crisp and soft lines.' The interior motif is just starting to be finalised, with the motif leaning to more contemporary and Balinese-inspired.

The yacht will be used for cruising with the owners large family and also for charter – currently the owner has a 116ft yacht that charters frequently – and charter-friendly design is being taken into consideration in everything from her stateroom layout to maximising social spaces.

IAG's President Michael Chang told Boat International that construction is well underway on the Noble Star Terrazza, with the hull expected to be finished by the middle of December and her launch is scheduled for 16 months from today.