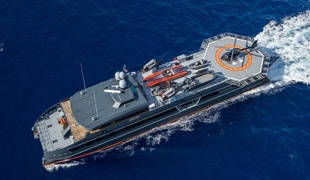 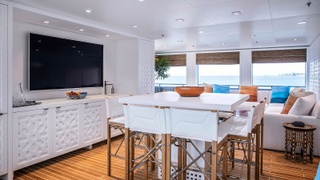 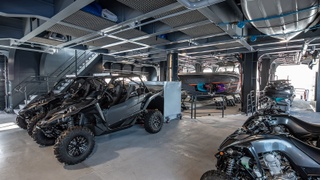 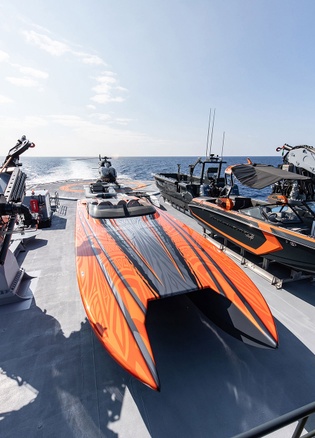 Catamaran builder Incat Crowther has launched the first hull in its shadow cat range, which has been named Hodor.

The 66 metre catamaran has ample deck and storage space accommodating tenders, toys and additional equipment. The shadow boat will also be used to transfer guests from helicopter to the mothership via Hodor’s tenders.

Design and naval architecture of the catamaran has been undertaken in-house by Incat Crowther while construction took place at Astilleros Armon’s Burela shipyard in Spain. Hodor has been project managed by Robert Smith of YCTS.

The completely customised shadow boat carries specific equipment and supplies to support the mothership, with key features including a reverse bow and low propeller draft of 3.1 metres.

Among Hodor’s cargo is five tenders, the largest of which is a 17-metre chase boat, Jet Skis and quad bikes. Hodor also includes a submarine garage, dive equipment with compressors, and a hospital with a decompression chamber. The helipad meanwhiles sits aft of the main deck. The tenders and submarine can be launched from the upper and main decks via two large knuckle boom cranes.

Hodor is equipped with five tenders, including a 17-metre chase boat

Accommodation on board is for a crew of 20 in a mix of double and twin cabins, all with ensuite bathrooms. Power comes from two main engines for a max speed of 22.5 knots and range of 5500 nautical miles at 14 knots.