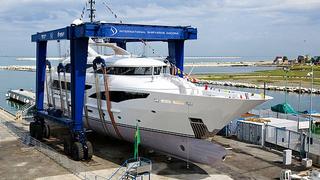 The second of International Shipyards Ancona's three motor yachts in the ISA 500 series was lowered into the water on Saturday and christened Papi Du Papi by her owner.

Constructed out of steel and aluminium, the 49.95 metre yacht shares the same technical platform as her near sisterships but differs in the design of her superstructure and transom. Her design comes from the boards of Andrea Vallicelli who worked in collaboration with ISA's in-house naval architects to achieve a sporty-looking yet voluminous displacement yacht with good performance and fuel efficiency. Her transom design borrows from the ISA 47 metre series with stairways that lead down to a stern beach area, which is accessed from the bathing platform by two wide curved glass doors.

Interiors are by designer Francesco Paszkowski in his first project with ISA.

The yacht has a top speed of 16 knots thanks to two CAT 3512C diesels and a pair of Quantum Zero Speed stabilisers ensure a smooth ride and comfort at anchor. She has a range of 2,300nm at 14 knots.

Papi Du Papi, which is due to be delivered in September, is the successor of a Custom Line Navetta 30, which went by the same name. She will make her debut at the Monaco Yacht Show.

Liberty was the first in the series to be launched in March, and the third is currently under construction.