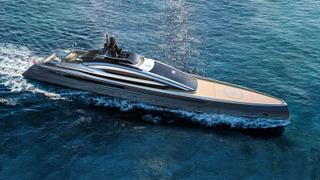 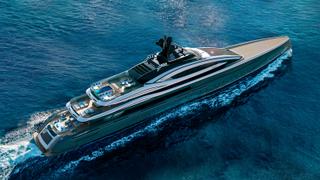 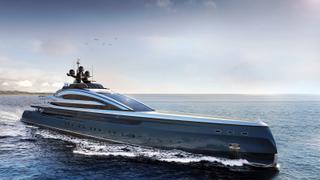 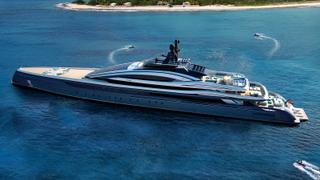 Hydro Tec's largest superyacht concept, the 100 metre Crossbow, has been taken on by ISA Yachts.

Crossbow will now be presented as the flagship of the ISA Yachts Sport Coupé line.

Based on an aluminium hull and superstructure, the arrow-like design has a beam of just 12.5 metres — more than a metre less than average for this size bracket and has a "fast, light and with a sleek sporty aesthetic".

The draft has been kept to just 3.5 metres to ensure Crossbow can reach cruising grounds that would normally be off-limits for yachts of this size.

The studio said the exterior deck areas have been designed with "speed in mind". Fixed furniture has been kept light and well protected from the wind. The bow meanwhile can be transformed into an entertaining and sunbathing area when the boat is at anchor.

Project Crossbow has an estimated top speed of 25 knots when a pair of MTU 16V 4000 M93L engines are fitted.

Perhaps the most unconventional aspect of this design is the location of the superyacht wheelhouse, which has been moved to the uppermost deck, leaving room for a double-height forward-facing atrium on the main deck.

Tender and toy storage has been a key priority and this can be seen in the foredeck helipad with hangar beneath and the capacious garage, which can house a pair of 9.5 metre tenders and four Jet Skis amidships.

Accommodation is for up to 16 guests split between eight double cabins, while the lower deck crew quarters allows for a staff of up to 32 people.

The studio previously revealed that it had received increased interest in the concept and demand for Crossbow inspired designs following the Monaco Yacht Show.

"After the Monaco Yacht Show this year we received even more interest to develop new designs based on the core principles of project Crossbow," the studio said.