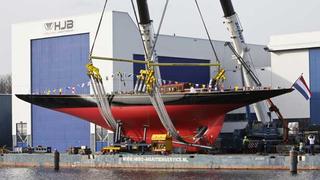 A sense of history being made was in the air at the launch of the J-class yacht Rainbow at Holland Jachtbouw on 17 February, when, in time-honoured fashion, the owner’s daughter cracked a bottle of champagne against Rainbow’s black hull.

Her namesake and predecessor, the original J Class Rainbow only took 100 days to build and was unveiled to an excited audience back in 1934. Designed by William Starling Burgess for Harold S Vanderbilt from the New York Yacht Club, she beat the British challenger Endeavour to win the America’s Cup. Sadly she was scrapped at the start of World War II for her metal.

Almost eight decades on, this 40m addition to the current J class fleet has been built to the same lines and reflects the same desire for speed and elegance. But while the original Rainbow was an empty boat with a deck and race rig, her 21st century successor took over two years to build in aluminium. She benefits from all modern technologies allowed under JCA regulations and the expertise of Gerry Dijkstra and his team gained on earlier J’s such as Hanuman.

Holland Jachtbouw is one of the few yards in The Netherlands able to launch a yacht of Rainbow’s five-metre draught. It did so in fine fashion, showcasing her stunning looks with the black hull offset by a striking gold leaf cove stripe and sunken mahogany doghouse and skylight. The flush clean deck oozes grand prix racing with custom adonised winches and not a hint of stainless steel. They form part of a phenomenal rig that will feature a high-modulus carbon mast, boom and spinnaker pole from Southern Spars, and North Sails 3Di racing sails.

Her interior is the epitome of what can be achieved when you place superyacht standards of comfort within a racing boat hull. Holland Jachtbouw’s craftsmen have finely honed the raised-and-fielded mahogany panelling in 1930s style, and this is complemented with fine art deco detailing.

While all modern functional requirements have been integrated with full respect for Rainbow’s heritage, the yacht is the first J Class yacht with a complete hybrid propulsion and power system. She can be operated on the Hy-Store Li-ion batteries, including sailing, navigation and hotel load. A lightweight 50kW WhisperPower Hy-Gen variable speed generator combined with the 50kW main engine integrated fly wheel generator provide the power. This gives Rainbow a high-tech propulsion set-up despite the minimal size available for an engine room and meets the owner’s desire for a silent period without running generators overnight.

After her delivery Rainbow will be put through her paces by a hand-picked professional crew in a rigorous training schedule leading up to the J Class Association regattas in the UK this summer.