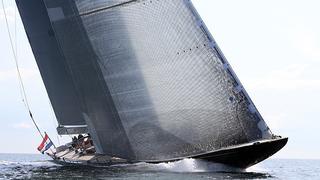 J-class replica yacht Rainbow set to be delivered by HJB

We received some terrific pictures of Rainbow and her crew undergoing training this morning. Launched mid-February, the beautiful J-class replica built by Holland Jachtbouw is now ready to be delivered.

To recap, the original Rainbow won the America’s Cup in 1934. She was designed by William Starling Burgess, and built by Herreshoff in the USA. In 1940 she was sold for scrap. Built in aluminium, the 39.95m Rainbow replica is based on the original design, with a modern update from Dykstra & Partners.

Her interior has a 1930s decor accommodating 8 guests and 8 crew. Guest accommodation consists of three cabins: a master, a double and a twin plus two Pullman berths. During the races, the crew will number 25 to 28.

Rainbow is also the first J-class yacht with a complete hybrid propulsion and power system.

Rainbow will take part in the J-Class races being held in England between June and July and sails under the number JH-2.